It was our last day on Santorini and everyone slept late as I spent almost 2 ½ hours talking with Rossetos. In your life there are people that you meet that you just like. You are not sure why, but over time the reasons show themselves. This last day showed me why I liked Rossetos so much. He was not only a proud person, something that I really admire about him, he was kind and loyal. I have never really thought about loyalty in a way that Rossetos made me think of it. He grew up on an amazing island, has built a wonderful business which has allowed him tremendous freedom, but he has pain that is deeply rooted around some personal events that he shared with me.

It wasn’t just the shari 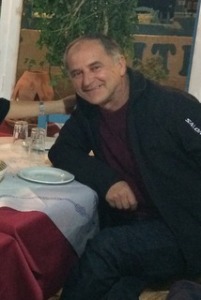 ng that endeared me to Rossetos, it was his appreciation for a simple life. He said that his father, at the age of 60, was able to live without needing any money. He built a small house overlooking to ocean, that Rossetos still owns, and he had a farm that produced all the food that his father and mother needed to survive. His father was independent and didn’t need anything other than the air that he breathed. Rossetos has such admiration for this simple life, something that he hopes for in his life.

Rossetos has built The Birds, the apartment complex that includes his own small home, back in 2006. The apartment complex income covers all of his needs that he has. He has built a nice business that can sustain him, but he also owns a few other hotels, a bar and a rental car business. When I asked him why he doesn’t just sell some of the businesses, he said that he wants his two sons to come into the business and he wants them to have options. If they like the hotels, then he will get rid of the car rentals. If they like the cars then he will get rid of some of the hotels. He is not just working to take care of himself, he is doing it for his kids, working so hard during the season just to sustain some businesses for the next generation. His boys are 18 and 16 and I’m sure that they will have multiple options to earn a living. I admire his passion and dedication to his family’s well being in a culture that struggles to make a living.

In the end, Rossetos just wants to live in his little apartment, spend his days with his guests in the 7 apartments he has built spearfishing and showing them around his amazing island. In addition, he wants to spend his offseason windsurfing in Brazil and then spend time in other parts of the world, including the US. At some point in the future I would like to return to Santorini during the late part of the season and spend a week or two experiencing the island through Rossetos eyes. I also look forward to hosting him to stay at our home in San Diego when he finds his way to the states.

To a life well lived!

This entry was posted in Uncategorized.