Yesterday, we left the apartment around 11 AM, expecting to get out much earlier. I thought it would be really cool to take a ferry from the Bondi area to the city from Rose Bay terminal, so we walked there (about 2 miles). The sun was pretty strong and the walk was pretty long, but we made it in one piece. When we got to the ferry stop we sat for a few minutes and started to wonder how long until the next ferry? We asked one of the guys on the dock and he said they only come every 2 hours or so. By this time Noah was already complaining that he was hungry! 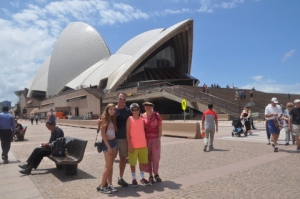 So, we looked at the schedule and it said 1 hour 26 minutes until the next ferry. Time to switch to plan B! We headed for the closest bus stop and 35 minutes later we were in central Syndey at Circular Quay, the main harbor. We checked out the boat ride we had purchased tickets for and then walked over to the Sydney Opera House, one of the most famous structures in the world. Noah was not impressed, but it was pretty nice. We walked back toward the main harbor and by this time everyone was hungry. I didn’t want to eat right there but we didn’t have that many options, so we opted for the local fish & chips fry shop that also had some salads. I wish I would have ordered just the salad, the fish was a bit over the top fried.

From lunch we headed on the local tourist bus and found our way to the little China Town area of Sydney. We walked around this mall area and then started walking around Sydney, through China Town and then on to Darling Harbor. The harbor is what makes Sydney to me. The harbor plays such an integral part in the lives of this city, with water taxis and access from one main area of the city to the other. You can be from Bondi to the main harbor in 20 minutes by boat and it will take you longer on a much less comfortable bus.

Once we finished walking around Darling Harbor we took a ferry to Circular Quay and sent the kids home as Ilise and I headed to Pymble for a Rotary meeting. I was asked to speak at the club up north and agreed to take the trip. Taking the public transportation at rush hour was very nice and sane. The platforms were calm and there was room on each train if you wanted to sit down. The train took about 35 minutes making all local stops and Pam Pritchard picked us up. Pam is a very nice woman who was the first female District Governor in her district in Australia. Her and her husband, Victor, we very nice and we sat with them at dinner.

The night was filled with meeting numerous people that were really nice, but the highlight was a presentation by a young exchange student who had just returned from a year in Sweden on a Rotary scholarship. Daniel was very well spoken and motivated to make a difference. He loved the winter in Sweden but seemed happy to be back in Australia. It’s young people like Daniel who will move our society forward and it makes me proud to call myself a Rotarian when we invest in fine young people like him.

To a life well lived!

This entry was posted in Uncategorized.