I have heard so much about how water is going to be the scarce commodity of the future. Well, I have found the answer, move to New Zealand! We have spent the past few days in Queenstown on the south island of New Zealand and just completed a drive from Queenstown to Franz Joseph. We have seen more HUGE lakes and bodies of water than you can imagine. We also went to Milford Sound yesterday and passed Lake Te Anu, which is the biggest lake in the country and the two we passed today, Lake Wanaka and Lake Hawea, were tremendous as well. Then there were all the bridges we crossed going over river after river on our 6 hour drive. Wow, that was a lot of water!

As for Queenstown, to say it is beautiful is an understatement. A ski town in the winter and a summer paradise with a huge glacial lake and surrounding mountains, this place is simply amazing. We spent the first day and a half of our trip getting to Queenstown, but it was worth it. The first day we got there it was Ilise’ 50th birthday.

We started the morning with a really nice breakfast at a little restaurant called Ivy & Lola’s. Ilise got eggs Benedict, which is one of her favorite things for breakfast, so that was a good start. After breakfast we booked a jet boat tour on Lake Wakatipu, which is the lake that Queenstown is located on. After the boat ride we took a gondola ride up a peak right by town and got some amazing pictures. I didn’t have a camera to take panoramas, so I stitched a few pictures together to give you an idea: 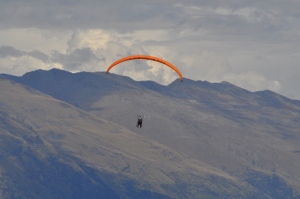 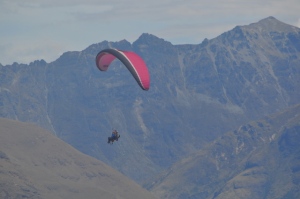 In addition to the great lake views there was a hang gliding company based at the top of the mountain and I was able to take some amazing photos of the hangliders. Here are two of my favorites:

After the gondola ride and the great photo opps we went back to the hotel to prepare for Ilise’ 50th birthday dinner. We told the hotel about her birthday as well and when we got back to our room earlier in the day they had a bottle of champagne waiting for us. That was very nice of Fiona, the concierge, and we took full advantage of the bottle. We headed out for an early dinner since all we had eaten all day was the breakfast after we arrived. So, off it was to Gantley’s restaurant. I am not one for fine dining, but that is what Ilise wanted to do for her birthday. We had a nice meal, but based on Ilise’ experience of fine dining in NY I don’t believe this lived up to the billing.

We returned to town after dinner and had some ice cream before calling it a night. We had a big day planned to head to Milford Sound the next day so we had an early night. The weird thing was that it was still light out at 10 PM! They sun comes up at 5 AM and it stays light until 10 PM which makes for a huge party town, which Queenstown seems to be. Lots more to discuss, but this is enough for one post.

This entry was posted in Social Change.