We were awoken at 4 AM, but really got woken up at 2:30 AM by a loud beeping horn of someone trying to get into the camp. They kept beeping and beeping for at least 20 minutes. Boy was that annoying when you are trying to sleep. My guess is that they woke just about everyone in the camp, including the person who opened the gate since the horn eventually stopped.

So, we get ready for our 4:30 AM departure and jump into another jeep for a 90 minute drive. It is pitch dark and we are driving on really bumpy roads. We enter the park with still another 45 to 50 minutes of driving. I can’t tell you how much I appreciate paved roads after the last 3 weeks of my life!

We arrived at an open field in the dark with some tractors in front of us and a few other jeeps parked beside us. We were taken to a basket in front of us and a gentleman starts talking to us in a South African accent. We later found out his name is Andrew and he was our balloon pilot. He was also the owner of the balloon company called Hot Air Balloons (pretty creative for you marketing types). He mentioned to us that when the balloon is almost full we will lie in the basket on our backs until the balloon gets pulled up. 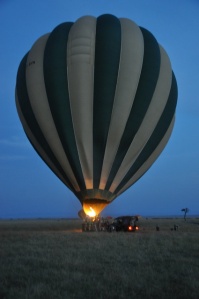 old to get into the basket and get on our backs. We start to feel the balloon straighten up and in a few minutes we are hovering above the ground and right in front of us is a small group of wildebeest. Andrew guides the balloon right over the small herd and scared most of them in all directions. Little did we know that was the only herd of animals we went over. We saw numerous zebra and wildebeest, but most of them were alone or in small groups. The people that told us we HAD to go on the balloon ride told us that their balloons went right over large herds of animals and they would move in waves. 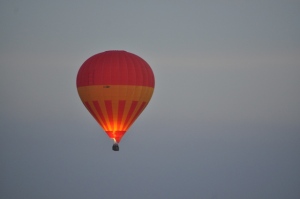 Well, no wave of animal movement but the experience was pretty incredible anyway. We were floating for over an hour about the Masai Mara and toward the end the captain was a bit concerned because in front of us were lots of trees and not a very large landing area before we would cross the river. That might seem like a small issue, but if we landed on the other side of the river then the driver of our jeep would need to drive about 90 minutes just to get to the first bridge that would enable them to come get us. Then it would be a 5 hour drive back to camp. So, we ended up landing just short of the river and all was safe.

The jeep picked us up and we drove about 35 minutes until we got to our breakfast set up. I asked the driver if the balloons ever land where the breakfast is set up and he said it happened the day before. Andrew told us he needs to decide where breakfast is set up before we leave the ground, so he has no idea what the conditions will really be like so we ended up a good 5 – 6 Km from our breakfast site. That might sound close, but there are no straight roads in the park so it took us a little while to get there.

The breakfast was a huge spread. We all had lots to eat and got to speak with some of the other balloon participants. There was a family of 10 from Texas that was very nice, as well as a film crew that interviewed both Drew and Noah for a show that will air in South Africa soon on the wildebeest migration. We will see if their interviews make the final edit. We also spent some time speaking with Andrew about his company, which he started here in the Masai Mara in 1993. He lives in a tent just outside the park and has been doing this just about every day for close to 20 years. Interesting business and he seems to enjoy it.

Our drive back to Siana Springs was about 2 hours with a small traffic jam in the park. The only road we were on with ditches on both sides was only able to fit two cars wide and some people stopped to look at something, we believe it was a cheetah. We sat there for the next 15 minutes trying to get through. In the end we had to back up a good 300 yards to get onto a parallel road and drive around. There must have been 40 vans right there and I don’t believe it was anything really worth seeing. Either way, we are back at camp relaxing and everyone is looking forward to getting home.

This entry was posted in Africa Trip.